The history of MAPT

Play therapist Kathryn Boone wrote the very first bylaws for MAPT, and continues to serve as a role model for play therapists around the state. A scholarship, the “Kathryn Boone Outstanding Play Therapist Award” for work in a private or agency setting, is named in her honor. Since 1993, MAPT has continued to grow, both in the number of members, but also the number of services available to those members.

A major achievement in the history of MAPT happened in April of 2008, when the organization was awarded a national provider certification for continuing education for play therapists (AP Number: 08-223). MAPT now offers Annual Conferences and regional workshops statewide for play therapists wishing to receive quality play therapy training.

Members of MAPT serve as school counselors, operate in private practices, as well as academic, institutional, public, and private settings. Their commitment to providing service to children and adolescents is second to none, and a big reason that Missouri is one of the leaders in the nation in providing these services to citizens.

Benefits of being a member of APT/MAPT 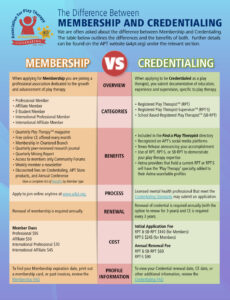 Interested in joining APT and Missouri Branch? We invite you to review a list of Member Benefits, then Join APT!

Interested in joining APT and Missouri Branch? We invite you to review a list of Member Benefits, then Join APT!